This is where the magic happens! During the Game Prototyping course, students of the Majors Game Development and Game Graphics Production come together and learn to transform a game concept to a simple prototype where the emphasis is put on gameplay mechanics.

Moreover, students will be assessed on how they present their game, on how they worked as an individual and even more importantly on how they functioned as a team member and a team.

In the module Game Prototyping, the student will deal with:

As a final assignment for the game prototyping module, students had to write a design document and subsequently develop a playable prototype for a game with single player mode. The theme of the game was Pirate Island. The students stepped into the role of an indie game designer and they created within a team of co-designers a minimalist game that can be played on a PC with a mouse and keyboard. The focus was on designing interesting gameplay with a minimum of control buttons, possible actions and rules. The graphical interface of the game had to be minimalist. The students were able to develop a playable prototype within a week. 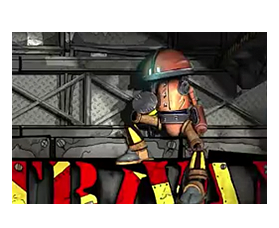