Alumnia Elien Kellens and Peter-Paul Milkain worked on the Belgian feature film Cafard. We placed them in front of our camera.

Other alumni that worked on the film: Jason Voet as 3D Generalist, Xander Clerckx: 3D Animator.

When Elien started to work on Cafard, she had to learn the software first. To get used to the software she started with crowd animations.

There was captured motion data of extras, and her job was to use that data to make a library with a lot of different cycles, for example clapping, walking, marching, lying on the ground, cheering, sitting, ... .

Because of the graphic style of the movie the facial expressions weren't always clear, so they needed to be pushed and exaggerated.

Next to body animation and facial animation there are also props (bicycle, cigarettes, money, weapons,...) that needed to be animated (which means a lot of constraints). Elien liked working on this project because she learned a lot about motion capture, and it expanded her look upon it. Even about the atypical look of the movie.

Peter-Paul was already working for Cafard right after his last exam before he graduated. The director, Jan Bultheel and Peter-Paul made the 45 second teaser first. A few months after that they got the green light to make the 12 minute trailer. For this trailer a small team was assembled. Together with Jan, they made the lay-out, using motion capture data.

After getting the modelled sets and animations from everybody, he put everything together in 3DS max and sent it to rendering.

When production started Peter-Paul had similar responsabilities and more. He set up the scenes for lay-out, but this time in motionbuilder.

If crowd or physics based animations (ragdoll or vehicles) were needed, he would set them up.

When the modellers and animators were done he put everything together in 3DS max and checked if everything (animation, cameras, lighting, textures,...) was ok, then he sent it to the render farm.

CAFARD makingof_withDAEalumni from DAE on Vimeo.

Jason worked on ‘Cafard’ as a technical artist. He was involved in the whole process: modeling, unwrapping, skinning and rigging. Jan wanted to paint all the textures himself and asked my advice from time to time regarding Photoshop. At the end of the pipeline, he had to prepare all the scenes. He loaded all the scenes the animators provided and checked them frame by frame to detect mistakes, alter models or fix other problems. Animation issues were directed back to the animator who was responsible for the scene. When everything was checked and fixed he send every scene to Pieter who started rendering them out. He also made simulation to enhance some scenes, added cigarette smoke, breath and other effects to make the scenes more believable. 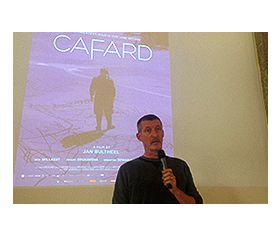