At the Animationfilm Festival ‘Anima 2015’ in Brussels (13/02-22/02) we meet up with Marlon Nowe, Disney animator, and Elien Kellens, DAE alumnus. Why this combination? Marlon gave a great animation workshop during a whole day which we attended, of course.

A little overview of what he did: after working in Belgium in several companies, Marlon decided to follow his dream and move to LA, California. He worked for 6 years at Blur Studios. During those years he gathered enough experience, material and maturity to present himself at Disney Studio’s. He was immediately hired and started working on ‘Bolt’, later he continued animating on ‘Wreck it Ralph’, ‘Frozen’, ’Tangled’, ‘Paperman’, ‘Big Hero 6’.
Marlon founded an online animationschool named ‘ Animsquad’, together with other Disney animators.
This is his new focus now. One of his new pupils from March on will be…Elien! Marlon is assigned as her mentor.
Anima was a great opportunity to let them meet!

A small interview to reflect Elien’s thoughts on the whole event!

1) Elien,you have been bitten by the animationbug. What did you do after graduation?

During my second year of DAE I discovered my love for animation. I started DAE because of my interest for 3D in general, without even thinking about animation, although I have always been fascinated by it for a long time. In the second year I learned to animate and I completely fell in love with it. The choice for the third year was easily made: I wanted to specialize in animation. But to focus on one course isn’t easy. I had to diverse my attention on other courses too in order to pass my exams. During my internship at ‘ Walking the Dog’ I learned a lot about animation and production. I didn’t really have plans what to do after my internship and DAE. ‘We’ll see what happens’.

Pretty soon I got a job offer to work on a feature film! Alexandra played a big part in this because she introduced me to Tondo Films, founded by Arielle Sleutels (producer) ans Jan Bultheel (director). They were looking for animators to work on a feature animation film named ‘Cafard’, using Motion Capture. I immediately ceased the opportunity and started working on the movie in August.

2) How did you discover Animsquad?

By working in a team with great colleagues, I already gained a lot of knowledge and heard about ‘Animsquad’.I saw the student reel on Facebook and was quite impressed.Due to the enthusiasm of my colleagues I finally subscribed for the course.I send my reel with the request to enroll for the intermediate workshop and received a positive answer!So I’ll start on March 3th! My present job ends this month (February) so this is an ideal timing to completely submit myself to ’Animsquad’ and make the best of it!

3) What are your expectations about following this course?

What do I expect?First of all a backpack full of knowledge and new experiences and next to this, new connections. I see now how important a good network is for your further career.Secondly that my animationskills will improve considerably. Because learning and evolving is motivating!

4) You had the opportunity to meet your mentor!!! Not many students can say they had that honor! A match you think?

Marlon gave an Animation Masterclass at Anima, Brussels.This was an opportunity that I couldn’t miss out on!So we meet.

He turned out to be a very pleasant person with lots of humor.A really nice man.I am so looking forward to follow his classes!

5) How long does this course take?

The course takes about 12 weeks (3months) with weekly assignments and an online meeting of 3 hours.

6) Is there a certain focus or is it more about animation in general?

At ‘Animsquad’ they offer three different courses.Beginner, Intermediate and Expert.I enrolled for the intermediate course where the focus lays on acting and short dialogues.To master the physical mechanics ,weight, timing, balance, readability.

7) What are your plans after this course?

I still don’t quite know.I’ll probably apply for animation jobs here and abroad.Frankly, I don’t want to look too far ahead because everything can change so quickly in a short amount of time.3 smaller projects were already presented to me. So I am not afraid for being out of a job.

But I truly dream to once work on the big feature animation films like ‘Tangled’ or ‘ Hotel Transylvania’.But with Marlon as an example I believe that anything is possible!

First of all I want to enjoy those 3 months at Animsquad and we’ll see what the tide brings! 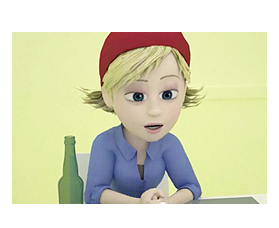